You are here: Home / Clean Romance / A Spy at the Highland Court by Celeste Barclay 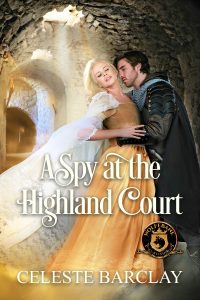 A Spy at the Highland Court by Celeste Barclay

An English knight with a Scottish heart…

Dedric Hage wants to make a new life in Scotland after years of service to King Edward I, but the English king insists on one last mission. When Dedric is sent to spy on his mother’s clan, the MacLellans, the knight is forced to choose between the oath he swore to the man who stole him from his clan and the country that calls him home but where he knows no one.

A Scottish lass in love with an English knight…

Isabella Dunbar has served Robert the Bruce’s court for eight years as a lady-in-waiting and a peace offering from her father to a king he once challenged. When Isabella has two chance meetings with Dedric, they recognize an undeniable attraction that could place them both in danger. Questionable allegiances threaten to drive a wedge between the young couple as their lives take them back to the Scottish-English border and into the heart of a war for Scottish independence.

Will either side accept their union, or will a battle between two kings tear them apart?

Author Bio:
Celeste Barclay, a nom de plume, lives near the Southern California coast with her husband and sons. Growing up in the Midwest, Celeste enjoyed spending as much time in and on the water as she could. Now she lives near the beach. She’s an avid swimmer, a hopeful future surfer, and a former rower. When she’s not writing, she’s working or being a mom.