You are here: Home / Billionaire / A Wild Ride At The Ranch by Catherine Walters 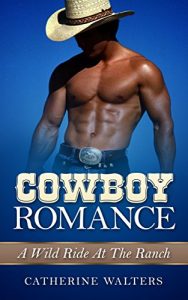 Clint is well known through many of his neighboring towns for, among other things, being quite the ladies man. Stories of his devious exploits have travelled through the land and most men hate him, even if they are mostly envious, and the women all want a piece of him. One day he’s on his way back to his ranch when he decides to stop off a few miles out and have a drink before finally heading home. It is there that he meets two very lovely ladies, Leigh Ann and Daria. They strike up a small conversation before he saddles up and leaves but he invites them to join him at his ranch later before heading out. The women seem elated to receive such an invite, but later that night while he’s at home he wonders to himself if either one will show up, or if both might show up. What happens later will only add to his notorious legend, as it will definitely be another wild ride on his ranch.