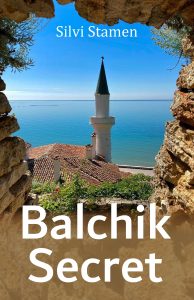 Silviya is a beautiful university student. She is frivolous, adventurous and hungry for new experiences. Her distant relationship seems a boring one, so she decides to take a trip to the Bulgarian Black Sea coast.

Mr.Big is a rich, hunky construction boss with business affairs all over the country and Europe. He is a womaniser, but does not realise that he will beg for a woman like her…

Once things start to happen, they both visit beautiful places, leading them into a web of secrets, passions, romance and hidden pleasures….

Balchik Secret is astounding, a story that evokes such powerful emotions, and the author has taken us back and forth in the timeline like somewhere in 1922 and sometimes in the present era.

This passionate debut novel by the author Silvi Stamen tells us a story of three strong female characters’ attempts to protect the love of their lives; a realistic novel about ordinary people that will stay with the reader for a long time.
If you love romance fiction, you will definitely love this one!

Learn More About The Author
Silvi Stamen wrote her first short story when she was 13 years old and participating in a school contest. It was called "All for love" and was inspired by her first love disappointment.
Later on, in her twenties, she began to travel a lot, meet different people and visit new places. So, she decided to start writing about them and share their stories with the reader. However, after getting married and living in London, where she was modelling, her life got busier, and writing was not a priority.
Almost ten years later, though, Silvi was inspired to write again during the COVID-19 pandemic. Being stuck in a mountain villa with her husband and three black cats, she decided to research and share her debut novel "Balchik Secret" with the world. At that difficult time, she turned to her first husband and said, "I will write about that story. And I know that the world will like it."
After careful research of the historical facts, her debut novel "Balchik Secret" is out, and readers are genuinely enjoying it. "Some good came out of the pandemic", a friend of Silvi often says.
Silvi Stamen lives in London and is spending her time between England and Bulgaria.