You are here: Home / Featured Books / Born to Fight by Brittany Anne 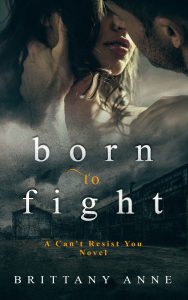 About Born to Fight by Brittany Anne

America has fallen. The world went dark. Technology, computers, cell phones, they’re a distant memory at best. The UNR controls everything within their districts in the East and the West. The people are slaves. But there is hope…

Resistance leader Hunter Kane was trained from birth to be the ultimate soldier. He has one purpose and one purpose alone: take down the UNR. After a near-fatal attack and a narrow escape from death’s door, Hunter finds his world turned upside down. He spent his entire life as a killer. A soldier. A savior? An emotionless robot with one job. But he can’t fight the feeling he gets when he stares into the eyes of the woman who saved his life. He was born to be a fighter, but suddenly, he’s not so sure that’s enough for him. What will Hunter choose when he must decide between his purpose and his heart?

Rain had not seen another human being in two years since she’d stowed herself away in an ancient bunker, content to live out her days in hiding. When when she stumbles upon a man caked in blood and barely breathing, she knows instantly that her entire world is about to change. Rain spent her whole life dreaming of the Resistance only to be thrown into it by the man who started it all, but how will he react when he finds out who she truly is? Rain desperately believes in their cause, and believes in the sparks flying between her and Hunter even more.

Can they really find happiness in this world that’s fallen apart, or will Rain’s secrets destroy them both and end the Resistance once and for all?

Learn More About The Author
Brittany Anne writes steamy romances with three common themes: sexy heroes, strong heroines, and sparks that fly right off the page. A hopeless romantic herself, she is a sucker for “happily-ever-after.”