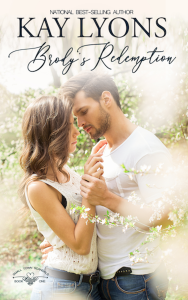 Joe Brody has been called a lot of things. Some true. Some not. But now that he’s back in his hometown, his focus is getting a job and a home for his ill father to convalesce. Easier said than done when no one will hire him.

Ashley Cade has a teething toddler and lives with an elderly man as part of an agreement she made to buy his house. Complicated? Not as much as it sounds. Wilson is a dear and his huge Victorian a gem in the rough. The lonely old man even recommends a friend’s son as a handyman to help with the repairs and finally Ashley is making progress. And Joe? Joe is… intriguing to say the least.

But when the police chief tracks Joe down and Ashley discovers his history, everything changes. Wilson swears Joe is innocent. Joe swears he’s innocent. But the evidence says otherwise and she doesn’t know who to believe when her future business—and her child’s life—are at stake….

Learn More About The Author
Kay Lyons always wanted to be a writer, ever since the age of seven or eight when she copied the pictures out of a Charlie Brown book and rewrote the story because she didn’t like the plot. Through the years her stories have changed but one characteristic stayed true— they were all romances. Each and every one of her manuscripts included a love story.

Published in 2005 with Harlequin Enterprises, Kay’s first release was a national bestseller. Kay has also been a HOLT Medallion, Book Buyers Best and RITA Award nominee. Look for her most recent novels from Kindred Spirits Publishing at online retailers or ask for them wherever books are sold.