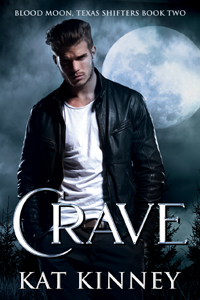 Lacey Blair had no idea about the existence of vampires and werewolves until a freak accident left her infected with lycanthropy. As a result of that night, Dallas Caldwell was banished from the pack and Lacey was left to fend for herself in a world of shapeshifters.

Ten years later, she runs the best cupcake shop in the Texas Hill Country, hunts the undead by night, and searches tirelessly for a cure for the blackouts her mother now suffers after having her memory erased by the werewolf council. The one thing she doesn’t have time for? Untangling the feelings still simmering between her and a certain ex turned best friend.

Dallas Caldwell already destroyed one life. When you’re the son of the pack Alpha, mistakes don’t just mean consequences. They mean exile. Back in Blood Moon at last, Dallas has resolved to stay away from Lacey Blair for her own good.

But when Lacey is attacked by vampires and targeted with a slow-acting biologic agent that prevents her from shifting, she and Dallas will have to team up to find out what exactly she’s been infected with—and whether this new weapon developed by the undead could pose a threat to the entire pack.

Learn More About The Author
Author Kat Kinney lives with her family and two extremely pampered guinea pigs who do not like werewolves, or falcons. When she isn’t writing about things that bite and howl, she can be found reading about romance, supernaturals, or fantasy, knitting crazy socks and plotting out future books.