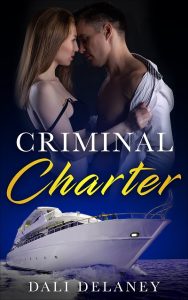 About Criminal Charter by Dali Delaney

Decisions have to be made: the cop or the criminal??

Ronnie Blackwood reluctantly returns to The Maverick for another season as the Chief Stewardess. Even though she was not ready for her vacation to end, the money she makes from working on the yacht draws her back to sea.

She quickly realizes she should have stayed on vacation after she is scooped up off the streets of Miami by the FBI. The ruggedly handsome and somewhat abrupt FBI agent in charge, Miles Miller, informs Ronnie that her next guests are not her ordinary clientele.

Edward Dubois, an accountant for the mob in Miami, is on the FBI’s radar. Miles feels he may not have chartered The Maverick just to get away from the city. Without time to place anyone undercover, Ronnie is Miles’ only hope in uncovering enough information to turn Edward against his employer.

Ronnie agrees, but begins to have mixed feelings once she meets the target. Edward Dubois did not fit the mental image Ronnie created for ‘mobster accountant’. His gaze sends shivers down her spine and she fantasizes about his touch. The more time she spends with this supposed criminal the harder it becomes for her to spy on him.

Her growing feelings for Edward and her unusual sense of duty to Miles tugs Ronnie in multiple directions.

Does she tip Edward off or does she help Miles catch his man?

Learn More About The Author
Dali Delaney resides in Houston with her spouse of five years and their amazing wonder dog, Sting. She spends her day writing, playing tug of war with Sting, and tending to her bonsai trees. She loves reading, hates tomatoes, and is a self-proclaimed culinary master. She is also a huge fan of romance novels, though can occasionally be caught sneaking a peek at a good nonfiction if the mood strikes her.