You are here: Home / Featured Books / Earl of Kendal 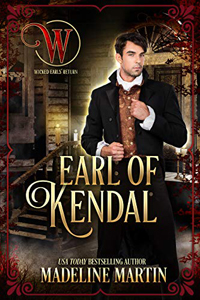 About Earl of Kendal

HE HAS A REPUTATION FOR BEING A SCOUNDREL…
Adolphus Merrick, Earl of Kendal, has a past he isn’t proud of, one that could have seen him hanged. Now the gaming hell owner of Mercy’s Door has an even greater secret, one he is so determined to protect that he’ll even do the unthinkable: get married. For a man who doesn’t trust easily, his alluring intended has a way of breaking through his guard and edging into his heart.

SHE IS A BIT OF A HOYDEN…
Lady Sophia Stopford lives her life to the fullest. At least, she did until her father insists that she wed one of his colleagues. She’ll do anything to get out of marrying, including escaping for a thrilling new venture. However, the very man who gave her the idea is now insisting that she return to London as his wife. And while she wants to resist, her attraction to the enigmatic Earl of Kendal has her curiosity piqued and her desire aflame.

TOGETHER THEY WILL CAUSE QUITE THE SCANDAL…
From ballrooms to gaming hells and into the wilds of Scotland, two people who don’t want marriage but can’t seem to resist one another will tumble headlong into an adventure that will change everything. When danger lurks and realities become bleak, can the spark of passion light their way? Or will love and hope be eternally lost to them both?

Learn More About The Author
Madeline Martin is a USA TODAY Bestselling author of Scottish set historical romance novels filled with twists and turns, adventure, steamy romance, empowered heroines and the men who are strong enough to love them.

She lives a glitter-filled life in Jacksonville, Florida with her two daughters (known collectively as the minions) and a man so wonderful he's been dubbed Mr. Awesome. She loves Disney, Nutella, cat videos and goats dressed up in pajamas. She also loves to travel and attributes her love of history to having spent most of her childhood as an Army brat in Germany.