You are here: Home / Cowboy/Western / “For an Ever After” 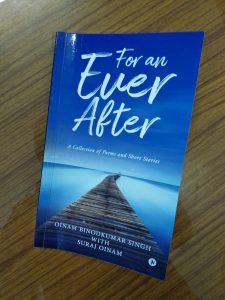 About “For an Ever After”

For an Ever After is a collection of poems and short stories by the father-son duo — Oinam Binodkumar Singh and Suraj Kumar Oinam. They hail from the beautiful state of Manipur in the North East region of India. Since it is a land of valleys, hills, and rivers, Nature is a recurring theme in their poems. Love, longing, and life’s seasons are some other themes they have tried to explore. Those who like poetry and have an inclination towards the open landscapes should surely savor their poems.

Learn More About The Author
Oinam Binodkumar Singh was born in Imphal to (Late) Shri Oinam Brajamani Singh and Oinam Ongbi Rajkumari Nayansana Devi. He is a BSc graduate from Guwahati University, Assam and a Visharad in Tabla from Bhatkhande Sangit Vidyapith, Lucknow. He is married to Wahengbam Ratna Devi and has four children. He has produced 215 audio cassettes of songs and dramas under Bindiya (B-Series) productions which were recorded at Bindiya Recording Centre, Imphal. He is an All India Radio approved lyricist. Among his lyrics in Manipuri version the songs Lamgee Chekla (The migratory bird), Basanta Ritudi lakle (The spring season comes) sung by Arambam Jamuna and Shakkhini Eshei Punsisimagi (I will sing the song forever) sung by Wahengbam Mempishak are some of the popular ones.
Suraj Kumar Oinam was born to Shri Oinam Binodkumar Singh and Oinam Ongbi Wahengbam Ratna Devi among three brothers and one sister (older). He grew up in Imphal and completed his schooling from RKMV, Deoghar. He is very fond of music and sports. His is a B.E. from VTU, Belgaum, Karnataka. Currently, he is an Inspector of Income Tax, Government of India.