You are here: Home / Featured Books / Gauging the Player by G.K. Brady 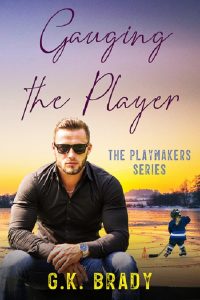 Gauging the Player by G.K. Brady

Gage Nelson doesn’t do one-night stands. In fact, he doesn’t date. He’s too focused on leading his team to the playoffs. Besides, he doesn’t need more women complicating his life—he’s got enough of that already.

But when a blue-eyed beauty bowls him over, he breaks his own rules and lets himself go with the flow for a night. A night he intends to be the first of many. When he wakes up, though, his dream girl’s gone, and he has no idea how to find her. He’s haunted by the woman he can’t get out of his mind.

Lily Everett is caught in a past she can’t let go. One night of steamy sex with a hot hockey hunk helps her forget—until she wakes up, and guilt grabs her by the throat. She runs and doesn’t look back. And that’s okay because hockey players are, well, players, right? Guys like him aren’t looking for long-term—and neither is she.

When a chance meeting brings them back together, Lily realizes she’s not only misjudged Gage Nelson, but she’s misjudged her own heart’s yearnings. What began as a one-night stand threatens to undo her carefully laced-up world.

Gage, aka Mr. Perfect, is trying to live up to his family’s and his team’s sky-high expectations. A lot’s riding on his big shoulders, but as long as he goes in the direction his moral compass points, he can’t go wrong. Right? As for Lily, he wants her. Period. He sets out to win her the same way he wins at hockey: with patience and persistence. But he finds himself facing off against a rival he can’t beat.

Can Gage convince Lily to give up the ghosts of her past and make room for him in her heart, or will she freeze him out forever?

Author Bio:
Since childhood, all sorts of stories and characters have lived in G.K. Brady’s imagination, elbowing one another for attention, so she’s finally giving them their voice on the written page.

A writer of contemporary romance, she loves telling tales of the less-than-perfect hero or heroine who transforms with each turn of a page.

G.K. is a wife and the proud mom of three grown sons. When she’s not writing, she might be reading, traveling, drinking wine, listening to music, or gardening—sometimes all at once! She currently resides in Colorado with her very patient husband.