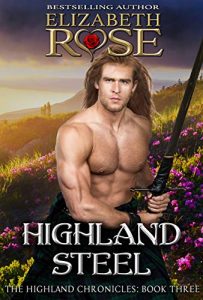 She needs his protection in traveling to the Highlands.
But where she wants him to take her is to his enemy’s territory. It’s a dangerous game she plays.

The Sassenach:
Lady Rhoswen Asquith accompanies her father and siblings on a journey to the Highlands, setting out on a very important and dangerous mission. The plan is to save her baby nephew from her late sister’s murderous Highland husband. Unfortunately, the traveling party has been attacked and her escorts killed by bandits. Her father is left for dead. With the only item they had to barter for her nephew’s safe return now stolen, she and her siblings are left without escorts and stranded on the wrong side of the border.

The Highlander:
Logan MacKeefe travels with his pet wolf at his side, and his sword in his hand. But today he’s been thrown out of the Horn and Hoof Tavern in Glasgow because his wolf has stolen a chicken right out of old Callum MacKeefe’s soup pot. Wanting a few minutes of peace and quiet, he bathes in the loch and suns himself on a rock to dry. It isn’t long before he is disturbed by a bonnie lassie atop a horse that comes crashing through the thicket, heading right toward him.

She’s a Sassenach who begs him to help her dying father. Never able to turn away a bonnie lassie in distress, Logan agrees, becoming the protector of Rhoswen and her younger siblings. But when her father dies, Logan finds himself in the middle of a harrowing situation, since where she wants him to take her is right to his enemy’s door.

Will honor and love win over revenge and guilt, as two people who should never be together find comfort and solace in each other’s arms? How far are they both willing to go for love?

Author Bio:
Elizabeth Rose is the bestselling author of nearly 90 books and counting. She writes medieval, historical, contemporary, paranormal, and western romance. Her books are available as ebooks, print, and some audiobooks as well.

Her favorite characters in her works include dark, dangerous and tortured heroes, and feisty, independent heroines who know how to wield a sword. She loves writing 14th century medievals, and is known for her medieval series.

Elizabeth started out over twenty years ago as a traditionally published author. But life takes it twists and turns and after losing her day job she decided to try her hand at Indie publishing.

She started self-publishing, creating her own covers and her own booktrailers on a dare from her two sons and has accomplished great feats in the last few years. She loves anything paranormal and is inspired by spending time in nature. Elizabeth has a secret garden that serves as her outdoor office where she writes in the summer. This same secret garden inspired her Secrets of the Heart series.

With over two dozen series, her latest one is called The Highland Chronicles.