You are here: Home / Featured Books / How to Train Your Viscount 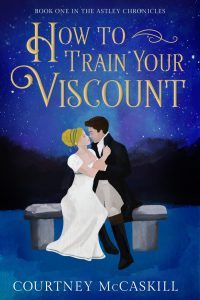 About How to Train Your Viscount

The only one who can help her is the man who broke her heart.

Four years ago, Lady Caroline Astley took one look at Henry Greville, Viscount Thetford, and fell horribly in love, in that particular way you can only fall in love at the age of fifteen.

He didn’t just reject her.

But now, in a stroke of rotten luck, he’s the only one who can help her.

It turns out that the “paste” pendant she borrowed from her sister, Anne, was no fake. It’s actually an ancient Egyptian amulet, and now Anne wants to auction it off to save hundreds of widows and orphans. What Caro can’t bear to tell her sister is that the necklace was stolen from right around her neck.

Caro has a few clues, but she doesn’t know an amulet from an obelisk, and the trail has gone cold. Guess who grew up in a house stuffed with Egyptian artifacts? Caro may despise Henry, but she needs him if she’s going to track down the thieves. Which begs the question of which is worse: letting down the orphans or risking her heart all over again.

If you like sizzling Regency romance that makes you laugh and makes you swoon, give How to Train Your Viscount a try!

Note: How to Train Your Viscount falls on the comedic end of the Regency spectrum; you might call it a Regency rom-com. The love scenes are red hot. Our hero’s mother wishes to regretfully forewarn the reader that her son utters several shocking obscenities during the course of the novel.

Learn More About The Author
After reading Black Beauty for the 1,497th time, Courtney McCaskill was inspired to write her own stories. Reviews of her early work were mixed, with her fourth grade teacher, Ms. Compton, saying, "Please stop writing all of your assignments from the point of view of a horse."

Today, Courtney lives in Austin, Texas with the hero of her own story, who holds the distinction of being the world's most sarcastic pediatrician. She is reliably informed by her six-year-old son that she gives THE BEST hugs, "because you're so squishy, Mommy." When she's not busy almost burning her house down while attempting to make a traditional Christmas pudding, she enjoys playing the piano, learning everything there is to know about Kodiak bears, and of course, curling up with a great book. Visit her online at www.courtneymccaskill.com.