You are here: Home / Billionaire / Just My Brother’s BFF 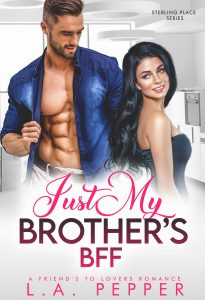 About Just My Brother’s BFF

Isabella was my best friend’s sister– forbidden. But someone forgot to tell her the rules.

I was a billionaire, rich, handsome and powerful with women panting after me but the only woman I wanted treated me like a cozy teddy bear.
For ten years, she was my upstairs neighbor, my PLATONIC best friend, but when her brother moved back in after his divorce, everything changed.
Our comfortable domestic life of movies and naps on the couch and weekly platonic farmers market dates had to stop, because even that made her brother suspicious.
I forced myself to move on and find another girl, any girl, or at least make all my friends THINK I had another girl.
Suddenly, Isabella was wearing barely any clothes, teasing me, getting jealous– This wasn’t platonic at all.
She was the one who made the move on me and I could no longer hide my desire.
We began a passionate affair, hidden from our friends, but mostly from her brother, then he began a mission to spy on her to discover whom she was having an affair with. Me.

Until Isabella joined the game and changed it. Who would win? Would she break her brother or would he find out who her real boyfriend was first?

Learn More About The Author
Like you, LA loves contemporary romance stories and is an avid reader.
She's had her heartbroken by her true love, yet is still addicted to happily ever after endings!
When LA is not writing about the next bad boy billionaire, she enjoys a glass of Chianti, raclette with her girlfriends, spin classes, and watching the sunrise every morning!
She is a self-proclaimed desperate housewife and lives in a cul-de-sac of excitement, drama, and love stories. Many of her outlines are inspired here.
LA was given her nickname by one of her teenage daughters, and it stuck with friends and family!
Leanne lives in Canada with her husband, and 4 children!
She would love to connect with you