You are here: Home / Contemporary / Marriage in Heaven 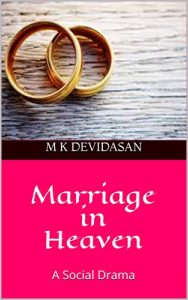 About Marriage in Heaven

This is the story of Wing Commander Krishnan who was in love with Rukhsthana, a Muslim girl, but could not think of marrying her because of vehement opposition from his sister, Shobha, a divorcee with a daughter and son, living with parents. Her strong objection was that if ever the wedding with a lady from another religion took place, the entire life and future of her children would be marred with the great stigma attached to that family. She had categorically denied acceptance to such relations to avoid endangering her daughter’s marriage market.
Krishnan had to live to look after the welfare and comforts of his sister and he had to struggle to educate her children; the daughter a doctor and the son an engineer, as dictated to him by his father on his death bed.
The sacrifice is never-ending and finally what happened is very interesting to keep every reader at tender hooks imagining what could be the life of Krishnan towards the end.

Learn More About The Author
M K Devidasan is a graduate engineer in Electronics and Telecommunication Engineering with Post Graduate Diploma in Business Management. He had served the Indian Air Force for 32 years as a Technical Officer. During his tenure, he had participated in the 1962 Indo-China war, 1965 Indo – Pak war, and 1971 Indo – Pak war.
His first work of an English poem book was published by Geetha Publishing house, New Delhi in 1976. His first novel was published by Writer’s Workshop, Kolkata in the year 1993 which was digitized by the Michigan University, Link:https://books.google.co.in/books/about/Her_miseries.html?id=KqBlAAAAMAAJ&redir_esc=y
Since turning his passion into a profession, M K Devidasan has written prolifically and is constantly exploring new themes, genres, and ideas. It’s incredibly hard work, but he is never happier than when he sits down at his desk putting the opening words to a new book or story on paper