You are here: Home / Featured Books / Miael: The Couturier 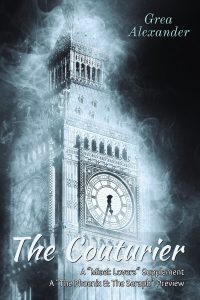 Duchess Cressida Courtlandt had no choice. At least that’s what she told herself as she stared up at the imposing structure that was the Groversner hotel, the neatly printed calling card of The House d’ LeBlanc clutched tightly in her richly gloved hand.

Still, as the hour came now upon midnight, as she stood alone on the nearly deserted London street, she could not quite compel herself to enter – to carry on towards the couturier’s penthouse suite and some horrible temptation, some horrible ruination worse than anything Bedlam had to offer.

On Goodreads, the Miael series is rated 4.02 based on 44 ratings & reviews.

The Courtier is a super short story (AKA short read) of about 5,000 words. It is intended as a supplement to Miael: Lovers by Grea Alexander and a preview of the new series, The Phoenix and the Seraph, (also by Grea Alexander) that will be released over the course of the next couple of years…or so.

Miael is a supernatural horror/fantasy fable – the deliciously creepy, decidedly twisted and delectably eerie tale of a cursed Phoenix & his dubious influence upon a cursed Seraph.

Learn More About The Author
Grea (pronounced Gray) Alexander is a female writer of African American, Native American and French descent who does not write her profiles in the 3rd person.

Born and raised in Houston, TX, I have successfully wormed my way across many a border and have, in effect, managed to infect all that I survey with my particular brand of grea-ness. My books are very character-driven with a focus on flawed, dynamic, culturally-diverse characters and strong, smart female protagonists.