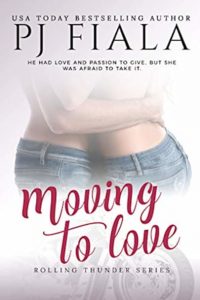 He had love and passion to give, but her experience with love equaled heartache.

Love can be hard in the best of times, but Jocelyn James has had more of the worst of it. Despite raising her son on her own and building a successful business she still can’t bring herself to believe in love. Even after meeting the sexy bike builder who turns her head.

After losing his best friend in Iraq, Jeremiah Sheppard spent his life making sure his friend’s family was taken care of, usually at his own detriment. Despite that, he’s managed quite well.

A chance meeting with a beautiful graphic designer has him taking stock in his past decisions and has her threatening to run for the hills as the family he’s protected his entire life works to keep them apart. Just when it looks like they might make it, a terrible accident threatens to destroy it all.

Learn More About The Author
PJ Fiala is a wife of thirty years, a mother of four grown children and the grandmother of three lovely grandchildren. When not writing a new story, she can be found riding her motorcycle and exploring this great land. Her writing revolves around people anyone would love to spend time with. No self-absorbed billionaires for her. Earning her Bachelor’s Degree later in life fulfilled a dream for her. Then she found the courage to write and hasn’t looked back since then. Currently she has three published books, Designing Samantha’s Love, Dog Days of Summer and Rydin’ the Storm Out. PJ also serves as the VP of Communications for WisRWA and devotes a large amount of her time helping other authors slog their way through this thing called publishing. She loves to hear from fans, so look her up and touch base.