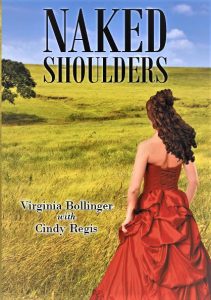 Naked Shoulders By virginia Bollinger & Cindy Regis
Naked Shoulders is about the violence that moved west with young America and the woman that moved with it. Robbery gambling murder Amanda will stop at nothing to survive. Set in 1850 _
1880 S. The backdrop is the civil war and its effect on the civilian population
Our story begins when Amanda, as a child, is wagered and lost in a poker game. Forced to adapt to her new life, she faces head-on the issues of the 1850s. Amanda meets her one true love, James, the night she defends herself in a fatal incident at the gambling house where she was working. Avoiding the law, she takes a job on an ill-fated riverboat. She is saved from the raging river by a con man who takes advantage of her youth. After he is arrested, Amanda must return to the gambling house until yellow fever forces its closing. Moving west, she gets drawn into the civil war when she witnesses the massive destruction of a city. Captured and accused of being a southern spy, she is taken to a converted women’s prison, which later collapses. Rescued by the Confederates, she is given the job of taking care of the wounded. Labeled as a union sympathizer, she gets kicked out of the camp just in time to witness the destruction of Lawrence, Kansas. James, now a Union officer, again enters her life.
After spending time on a wagon train and at a mining camp, Amanda arrives in Dodge City, Kansas. She runs into James (now a marshal) they must face challenges with the clashes of their professions. They embark on many adventures with Indians, ramifications from the war, the reconstruction, survival in the wilderness, and trials; all through this. their love endures.

Learn More About The Author
Cindy Regis, the mother of four, holds a degree in engineering from Penn State and one in business from Slippery Rock University. She worked as an investigator for the F.B.I. for many years. Enjoys costume and set design, fishing, and travel. Upon retirement, she moved to Florida to be near her children and grandchildren.
Virginia Bollinger worked in the mills of western Pennsylvania for 40 years; apron retirement, she took a job as a direct care worker, she holds a degree in Marketing and Management from Slippery Rock, Pa. Loves art, old movies, tv westerns, and babysitting. Virginia has a passion for history and music. She is the youngest daughter of ten; the family business was coal mining.