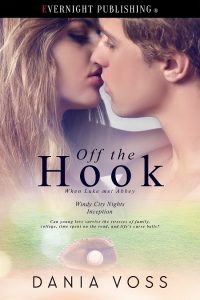 About Off the Hook by Dania Voss

She was headed to college. He was an up and coming pitcher in the majors. Life had other plans and threw them a curve ball.

Abbey Jayne has always been a bit of a nerd. She prefers books and computers over people. Especially boys. She hasn’t worried much about dating and is content taking a backseat to her sister Cassie, the social butterfly. Abbey’s headed to college in the fall anyway.

Everything changes after she reluctantly agrees to join Cassie and her boyfriend for dinner. Hunky pitcher for the Chicago Cobras, Luke Stryker is also coming along. He seems larger than life and Abbey’s surprised by her attraction to him.

At twenty, Luke Stryker is already one of the best pitchers in the majors and the sole heir to his family’s fortune. His world turns upside down when he meets Abbey. Right away, he senses she’s special. That she’s meant to be his.

With their relationship growing quickly, Luke asks Abbey to join him on the road for the adventure of a lifetime before her classes start in the fall, but she’s torn about what she should do. Her mother is upset and Luke’s agent thinks she’s in the way. Abbey believes she and Luke have a future together, but it won’t be easy.

Can young love survive the stresses of family, college, life on the road, and everything that goes along with being a professional athlete?

Learn More About The Author
Award winning author Dania Voss writes compelling, sexy romance with personality, heat, and heart. She loves anything pink and is a huge fan of 80's hair bands. Born in Rome, Italy and raised in Chicagoland, she creates stories with authentic, engaging characters.

Her award winning series Windy City Nights has received 5-star reviews from Readers’ Favorite ®. "Hannah's Bliss" received a 5-star review from The TBR Pile and was voted April 2019’s Book Of The Month. All three novels in the series were determined as Recommended Reads in the 2019 Author Shout Reader Ready Awards, and “Hannah’s Bliss” earned an award in the Oklahoma Romance Writers of America’s 2020 International Digital Awards contest and has recently finaled in the National Excellence in Romance Fiction Awards..

​Dania’s work has been highlighted on NBC, ABC, CBS, and FOX, and she has been featured in the Chicago Tribune, Southern Writers Magazine, Chicago Entrepreneurs Magazine (selected as the #8 Top Chicago Author in 2021), the Artist First Radio Network, and has been a guest speaker for the Red Hat Society. The Windy City Nights series is going to the moon in late 2021, as part of the Writers on the Moon project.