You are here: Home / Featured Books / Playing By Her Rules 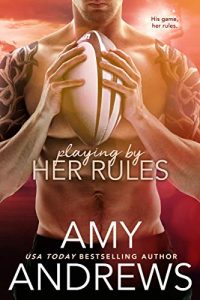 About Playing By Her Rules

Sydney Smoke captain and rugby god Tanner Stone wants to be interviewed about as much as he wants to snap an Achilles, but it may just be his chance for a rematch with his high school sweetheart.

Matilda Kent’s big mouth has landed her an interview with the one man she hoped to never see again—her high school boyfriend who broke her heart. But, with a promotion on the line, she’s prepared to play nice while dishing the dirt on the guy.

An epic war or words leads to a flurry of action both on the field and between the sheets and this time winner takes all.

Learn More About The Author
Amy is an award-winning, USA Today best-selling, double RITA nominated, Aussie author who has written seventy plus contemporary romances in both the traditional and digital markets. Her books bring all the feels from sass, quirk and laughter to emotional grit and panty-melting heat.

At sixteen she met a guy she knew she was going to marry and several years later she did. They have two grown kids who have flown the coop for distant shores which enables their travel fetish.

She loves good books and great booze although she'll take mediocre booze if there's nothing else. For many, many years she was a registered nurse which means she knows things. Anatomical things. And she's not afraid to use them!

She's just taken a sea change and gets to create stories whilst overlooking the mighty Pacific Ocean.