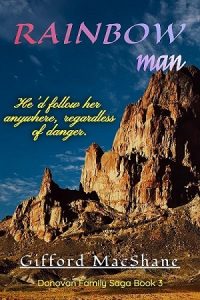 About Rainbow Man by Gifford MacShane

Renowned silversmith Alec Twelve Trees is arrested and beaten by a rogue US Cavalry patrol. Alec is half Navajo, and this act of blatant racism invokes the ire not only of his father, but of the entire village of White’s Station. While the town’s leading citizens try to convince the Army it’s not needed there, Alec is nursed back to health by Irene Donovan.

Eighteen-year-old Irene is a gifted herbalist. Overindulged by her father and seven older brothers, Irene often lets her willfulness trump her better nature. But Alec understands her: he’s been her best friend since their school days, and loved her almost as long. He’s never revealed his feelings to her, certain her family will not accept him.

Alec refuses to press charges against the soldiers who beat him, but Irene begs him to reconsider. Alec honors her wishes, and realizes he is powerless to escape her charms, even though he believes she will never give him the love he craves.

When a parade of suitors comes through her father’s door, Alec’s agony is sometimes overwhelming. At the same time, Irene’s frivolous nature rears its ugly head again. She escapes one hazard with her honor just barely intact, and his anger knows no bounds. Then her recklessness puts her in mortal danger, and he must decide if he will let her go or risk his own life to save hers.

Learn More About The Author
Gifford MacShane is the author of historical fiction that celebrates the resilience of the human spirit. Her novels feature a family of Irish immigrants who settle in the Arizona Territory. With an accessible literary style, MacShane draws out her characters' hidden flaws and strengths as they grapple with physical and emotional conflicts.

Singing almost before she could talk, MacShane always loved folk music, whether Irish, Appalachian, or the songs of cowboys. Her love of the Old West goes back to childhood, when her father introduced her to Zane Grey. She became interested in Irish history after realizing her ancestors had lived through the Great Potato Famine. She’s combined these three interests into a series of romances, each with traditional song lyrics and a dash of Celtic mysticism.

The DONOVAN FAMILY SAGA includes WHISPERS IN THE CANYON (Book 1), which was a finalist for Historical Romance of 2019 with the Coffee Pot Book Club. The series also includes THE WOODSMAN’S ROSE (Book 2), and THE WINDS OF MORNING, a prequel novella requested by her fans. RAINBOW MAN (Book 3) was published on 10/18/21.

MacShane is a member of the Historical Novel Society and is an #OwnVoices writer. An avid gardener, Giff cultivates pollinator plants and grows tomatoes (not enough) and zucchini (too much). A self-professed grammar nerd, Giff currently lives in Pennsylvania with her husband Richard, the Pied Piper of stray cats.