You are here: Home / Featured Books / Return to Retribution Bay 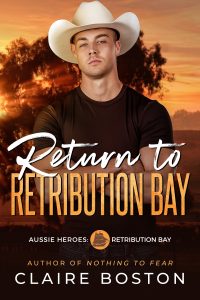 About Return to Retribution Bay

They’ve both had their fair share of tragedy. Now the only way to heal could be to catch a killer.

Sergeant Brandon Stokes hasn’t been able to face his family for over a decade. But when his parents are killed in an accident on their remote sheep station, the guilt-ridden soldier must face his demons and return home. He’s unprepared for the gutsy female drifter who seems determined to help him reunite with his estranged family.

Amy Hammond has been running since she was fifteen. Now she’s finally found the stability she’s craved with employers who treated her like a daughter. But with her bosses’ sudden death and the arrival of their handsome military hero son, her head and heart are thrown into chaos.

Distrusting Amy’s real agenda, Brandon is forced to team up with her when they uncover evidence that his parents’ demise was no accident. And though Amy knows she needs to win the hunky sergeant’s trust, the sinister turn of events makes her fear any chance of love could be cut fatally short.

Will the troubled couple expose a murderer in their midst before they become the next victims?

Buy Return to Retribution Bay to dig up trouble in the dusty red soil today!

Learn More About The Author
Claire Boston fell in love with romance and romantic suspense at eleven when she discovered her mother’s stash of Nora Roberts novels. Like Nora, she writes series set around families or groups of friends with a guaranteed happy ending.

She loves travelling and learning about new cultures and interesting vocations which she then weaves into her writing.

When Claire’s not at the computer typing her stories she can be found creating her own handmade journals, swinging on a sidecar, or in the garden attempting to grow something other than weeds.

Claire lives in Western Australia with her husband, who loves even her most annoying quirks and is currently learning how to knit.