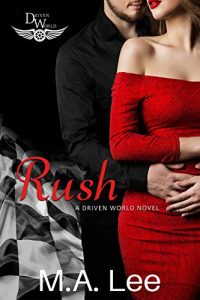 Rush is the ultimate playboy.
As the CEO to Langley Oil Company, Rush lived a fast-paced life of luxury and wealth. Now, he has his sights set on a new venture, race car driving.
Grace has struggled her entire life. Orphaned at a young age, she has had to fight for everything she has. Now, with a chance to become a top journalist in the racing world, she is determined to catch a blazing story.
And, that story just sped right into her life.
After an entangled meeting, at Auto Club Speedway, Grace discovers that L.A.’s hottest playboy has set his sights on the racing world—and Grace. Rush becomes desperate to prove himself against his harshest critics and earn Grace’s trust. As Rush begins to open up to Grace, she quickly learns the heartbreak and deadly secrets lurking behind Rush’s cocky attitude and devilish smile.
With secrets unraveling, Grace begins to let down her guard with Rush. Can these two gain traction on and off the track together? Find out in this sensual and drama-filled novel.

Learn More About The Author
M.A. Lee is a new adult romance author who has joined forces with K. Bromberg in the Driven World Series.