You are here: Home / Cowboy/Western / Saved by Luke 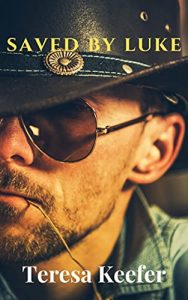 About Saved by Luke

When Hannah left her parents’ ranch over ten years before, she believed she would never return. After all, she had found her prince in a pick-up truck and they were going to live happily ever after.
Fast forward to the present time, she finds herself trudging along an abandoned Wyoming road in the middle of a spring snow storm after leaving her washed-up rodeo star in Las Vegas. She was going back to the ranch she had left in hopes she could find forgiveness in her father’s eyes.
With her rental car in the ditch, she thought she’d never make it home alive until a truck pulls up beside her bearing the logo of her father’s ranch. Relieved, she approaches the truck only to find her nemesis. Luke Blackstone. And he’s even more domineering than he was when they were growing up.
As Hannah slips back into the ranch life–as Luke’s employee–she manages to get herself in trouble more than once. And it seems the brooding foreman Luke Blackstone is always the one there to save her.

Learn More About The Author
Teresa Keefer was chosen by her adoptive parents in Warsaw, Indiana and has remained in Indiana all her life. She currently resides in rural Indiana with a menagerie of dogs, cats and goats after a family of greedy raccoons ate all her chickens on a hot Saturday night. She has three beautiful adult daughters and seven fantastic grandchildren who all live a hop, skip and a jump away from her.

A life-long lover of books, Teresa learned to read at the age of four and has been an avid reader ever since she won her community’s bookmobile reading contest and got to ride the library float in the Canal Days parade in Wabash, Indiana. As an adult, she was encouraged by her know-it-all best friend to write a book after he gave her a book idea and she cranked out three chapters the first day. After writing her first full-length novel—Coming Home—she got disappointed in all the canned rejection letters, so she went in search of another option and learned about self-publishing. Coming Home is a sweet, contemporary romance which takes place in a fictional town called Possum Creek and was published in February 2012. Since then, there have been two additional Possum Creek novels along with over twenty more novels including the Amazon best-selling, steamy, paranormal thriller Vincent-Blood Retribution the first in her New Orleans vampire series.

She has also contributed to six anthologies, the most recent being Hope Harbor which all proceeds go to an organization which supports the rescue and rehabilitation of victims of child sex trafficking.

Holding an MBA from Indiana Institute of Technology, she has spent the last 30 years in the human resources profession. In her spare time—what little there is—she can be found doing a variety of crafts, cooking, studying the paranormal, making organic remedies, and barefoot gardening. Her bucket list is quite extensive, and she is determined to mark off every item—as she adds two more for each one accomplished.

If you would like to connect with Teresa, see her schedule of public appearances or send her an email at teresa.keefer.author@hotmail.com.