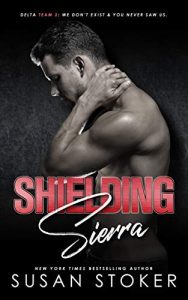 Some connections are more intense than others. How far as they willing to go to keep that bond aliveAs a civilian contractor, Sierra Clarkson thought she’d found the perfect way to serve her country, short of joining the military…until she was kidnapped from abase in Afghanistan. Turns out terrorists don’t care if you’re a soldier or not; everyone bleeds the same. Even worse, no one knows she’s been taken. Her missing belongings point to desertion—which means no one is looking for her, either.But someone is.Fred “Grover” Groves never forgot the redheaded spitfire working the chow line on a base in the Afghani desert. He’d felt an instant attraction to the petite woman, a connection deep in his bones…which Sierra herself clearly didn’t feel, since she’d promised to keep in touch after his mission ended, only to ghost him—and seemingly her job.But she didn’t.When several contractors go missing from the base, it looks more and more like Sierra didn’t abandon her post. Then a long-lost letter proves she’d followed through on her promise to stay in touch with Grover—and suddenly, all bets are off. He bucks every protocol he’s ever known after returning to Afghanistan. If Sierra’s still alive, he’ll find her. Or die trying.But Sierra is hardly a damsel in distress. Grover witnesses her strength and bravery firsthand in a dark desert cave. And at home, against a common enemy, he’ll witness her sheer nerve, her deep love, as they both fight for the life they’re trying to build together.
**Shielding Sierrais the 8th and final book in theDelta Team TwoSeries. Each book is a stand-alone, with no cliffhanger endings.

Learn More About The Author
New York Times, USA Today, and Wall Street Journal Bestselling Author, Susan Stoker has a heart as big as the state of Texas where she lives, but this all American girl has also spent the last fourteen years living in Missouri, California, Colorado, and Indiana. She's married to a retired Army man who now gets to follow her around the country.She debuted her first series in 2014 and quickly followed that up with the SEAL of Protection Series, which solidified her love of writing and creating stories readers can get lost in.