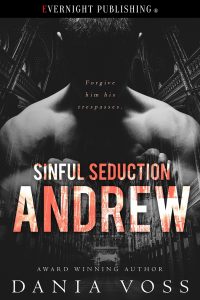 Forgive him his trespasses.

Charmeine Baker has sidestepped Andrew Knight for years. He’s persistent, irresistibly handsome, and makes her pulse race with excitement. She resists him because although he’s “a catch”, Andrew also represents the kind of wealth, power, and privilege she despises.

Successful nightclub owner Andrew Knight has known Charmeine since the day she was born. Now the pastor’s daughter is all grown up and he is certain she’s meant to be his. Only Charmeine keeps giving him the brush off despite their undeniable chemistry.

Andrew knows Charmeine has doubts about him, but he’ll do anything to have her, including pressuring her to marry him in exchange for saving her parent’s church from being bulldozed. Blackmail might be a sin, but Andrew will have to atone for his transgressions later.

Ever the dutiful daughter, Charmeine sacrifices herself and reluctantly agrees to marry Andrew. Can she survive at the mercy of the man who captured her heart against her will?

Learn More About The Author
International best selling and award-winning author Dania Voss writes compelling, sexy romance with personality, heat, and heart. She brings her background as an Italian born in Rome and raised in Chicagoland to create stories with authentic, engaging characters. A favorite with romance readers, her debut novel "On The Ropes," the first in her Windy City Nights series, was nominated as Best Contemporary Romance in the 2018 Evernight Publishing Readers' Choice Awards.

The second and third installments in the Windy City Nights series, "The Warriors' Whisper" and "Hannah's Bliss" received 5-star reviews from Readers' Favorite ®. "Hannah's Bliss" received a 5-star review from The TBR Pile and was voted April 2019's Book Of The Month. All three novels in the series were designated as Recommended Reads in the 2019 Author Shout Reader Ready Awards. "Hannah's Bliss" won an award in the OKRWA 2020 International Digital Awards contest and 1st place in the 2021 National Excellence in Romance Fiction Awards (NERFA) in the Erotic Romance category. Dania's work has been highlighted on NBC, ABC, CBS, and FOX, and she has been featured in the Chicago Tribune and Southern Writers Magazine. In April 2021, Dania was designated as Chicago's #8 Top Author in Chicago Entrepreneurs Magazine.

The Windy City Nights series of ebooks will be heading to the moon in 2022 as part of the Writers on the Moon project.

When she's not writing, you can find Dania at a Cubs game, a rock concert or exploring the city of Chicago.