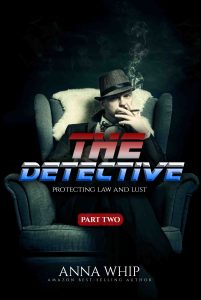 About The Detective – Part Two: A paranormal gay romance story by Anna Whip

The glass in his hand shattered, slicing open his palm.

He felt an oddly familiar pricking at the hairs on the base of his neck and turned, pressing his hand against the bar, the cut upon his palm now completely healed.

He left the bar to walk in the cold air. He felt another pull at his nervous system and pressed against the wall, his near freezing breath fogging the window pane slightly. He inched along until he saw him, the darkened shape of a man framed in the alley way, mysterious and sombre. An unearthly mist crept around their feet, thickening, as though the atmosphere inverted with the approach of such opposite poles. even the sky above seemed to cloud, the cold blue white light of the street light casting an ethereal glow upon the coldly, silent scene. The stranger drew a sword from his overcoat and marched towards him with measured. deliberate steps, assuming a fighting stance with a feline grace.

“I am Liam, of the Fianna,” he announced, holding his sword aloft.

“That means nothing to me, ” he shrugged, producing his own weapon, a 19th century officers sword, taken from his first kill, who’ had seemed not to take to kindly to being garrotted then decapitated with a piano wire, or being beaten senseless with a length of steel pipe.

Learn More About The Author
Anna is a writer, poet, tattoo artist, and boxer. She loves exploring the limits of pleasure by herself and in the company of some not-so-innocent friends.