You are here: Home / Featured Books / The Patron by Tess Thompson 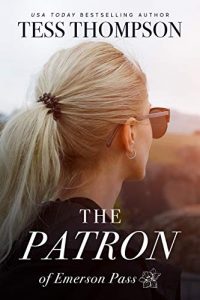 About The Patron by Tess Thompson

She’s afraid to take risks. He’s an incurable daredevil. When tragedy throws them together, will it spark a lasting devotion?
Crystal Whalen isn’t sure why she should go on. Two years after her husband’s death on a ski trip, she’s devastated when a fire destroys her quiet Colorado mountain home. And when she can’t keep her hands off the gorgeous divorcé who’s become her new temporary housemate, it only feeds her grief and growing guilt.
Garth Welty won’t be burned again. After his ex-wife took most of his money, the downhill-skiing Olympic medalist is determined to keep things casual with the sexy woman he can’t resist. But the more time they spend with each other, the harder it is to deny his burgeoning feelings.
As Crystal’s longing for the rugged man’s embrace grows, she worries that his dangerous lifestyle will steal him away. And although Garth believes she’s his perfect girl, the specter of betrayal keeps a tight grip on his heart.
Will the thrill-seeker and the wary woman succumb to the power of love?
The Patron of Emerson Pass is the emotional second book in the Emerson Pass Contemporaries small-town romance series. If you like lyrical prose, unexpected chances at happiness, and uplifting stories, then you’ll adore Tess Thompson’s sweet tale.

Learn More About The Author
Tess Thompson Romance…hometowns and heartstrings.
Tess Thompson is the USA Today Bestselling and award-winning author of contemporary and
historical Romantic Women’s Fiction with nearly 40 published titles. When asked to describe her
books, she could never figure out what to say that would perfectly sum them up until she landed
on, Hometowns and Heartstrings.
She’s married to her prince, Best Husband Ever, and is the mother of their blended family of four
kids and five cats. Best Husband Ever is seventeen months younger, which qualifies Tess as a
Cougar, a title she wears proudly. Her Bonus Sons are young adults with pretty hair and big
brains like their dad. Daughters, better known as Princess One and Two, are teenagers who make
their mama proud because they’re kind. They’re also smart, but a mother shouldn’t brag.
Tess loves lazy afternoons watching football, hanging out on the back patio with Best Husband
Ever, reading in bed, binge-watching television series, red wine, strong coffee and walks on crisp
autumn days. She laughs a little too loudly, never knows what to make for dinner, looks
ridiculous kickboxing in an attempt to combat her muffin top, and always complains about the
rain even though she chose to live in Seattle.
She’s proud to have grown up in a small town like the ones in her novels. After graduating from
the University of Southern California Drama School, she had hopes of becoming an actress but
was called instead to writing fiction. She’s grateful to spend most days in her office
matchmaking her characters while her favorite cat Mittens (shhh…don’t tell the others) sleeps on
the desk.
She adores hearing from readers, so don’t hesitate to say hello or sign up for her newsletter:
http://tesswrites.com/. You’ll receive an ebook copy of her novella, The Santa Trial, for your
efforts.