You are here: Home / Fantasy / THE RIVER KING: The Demon Door Book Four by Kim Alexander 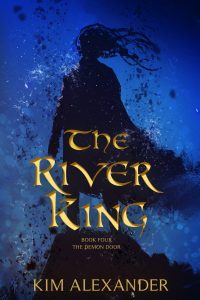 About THE RIVER KING: The Demon Door Book Four by Kim Alexander

Sometimes love doesn’t change the world. Sometimes it changes all of them.

Rhuun, the half-human and wholly-reluctant prince of the demons, has finally reunited with his fiery Lelet. It’s too bad they must hide behind a facade of icy indifference to fool those who are determined to keep demons and humans apart…by any means necessary.

There is more at stake than bringing the miracle of rain back to Eriis. It’s not just sand and lost royals poised to come through the newly-opened Door. Something ancient is hungry, and fat, complacent Mistra won’t stand a chance. Even worse, whispers and shadows speak of blood magic that could destroy not just The Door, but all Doors—forever—barring the way home for lovers and enemies alike.

Will the love Rhuun and Lelet have moved worlds to share be the very thing they must sacrifice to save their worlds?

Learn More About The Author
Kim Alexander grew up in the wilds of Long Island, NY and slowly drifted south until she reached Key West. After spending ten years working as a disc jockey in the Keys, she moved to Washington DC, where she reported the traffic and spun the Oldies. After a career upgrade, she became the co-programmer of Sirius XM Book Radio, which gave her the opportunity to interview some of her writing heroes, including Anne Rice, George RR Martin, Neil Gaiman, Stephen King and Margaret Atwood, among many hundreds of others. She began writing when she ran out of authors to interview (and they pulled the plug on her channel.)
She currently lives with two cats, an angry fish, and her extremely patient husband close enough to the National Zoo to hear the lions and the monkeys, at least she hopes that’s what those noises are.