You are here: Home / Featured Books / The Tender Kiss of Fate 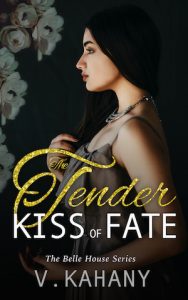 About The Tender Kiss of Fate

Once upon a time, he broke her heart. And now he may be the only one who can heal it.

“The Tender Kiss of Fate” is a stand-alone novel in the Belle House series.

For five years Blanche Carey has tried to forget Marko Farini. His eyes. His kiss. His touch. And… how he disappeared—without a good-bye, leaving Blanche to the mercy of other men.
Now she is a courtesan at a luxury brothel on Piccadilly. And Marko is back from Paris and in charge of Elysium. The extravagant venture takes London by storm. And Marko sets Blanche’s heart on fire again, making her reckless and blind to anything around, including Lettice Mable Hatch.

Lettice is Marko’s former paramour and Blanche’s worst enemy. She is as beautiful as she is dangerous. Her beauty shop conned many women across Europe, and now she is back in London. But one thing Lettice Hatch is even better than deceiving people—it’s ruining their lives. And Blanche is her favorite target.

Marko’s life spins out of control as he juggles his new venture and Blanche—the woman who has captured his heart and never let go. And now is his only chance to make things right.

Secrets. Unspoken words. Feelings so deep they scare. And the wrath of the woman that can ruin it all. “The Tender Kiss of Fate” is a tale of love and second chances in Victorian London.

WARNING: The book contains scenes of an explicit nature and drug use. The Belle House is a brothel, and many characters are of the world’s oldest profession. That being said, if you have issues with any of the above, please, don’t purchase or read the book, for it’s not your cup of tea, and your anger is not mine. Thank you.

Learn More About The Author
Raised on the love for music and literary classics, Vlad Kahany has later studied philology and religion.
The Belle House series takes place in Victorian London. The Belle House is a luxury brothel on Piccadilly, and the main heroines are mostly women of the oldest profession on earth. All books in the series are stand-alone novels.