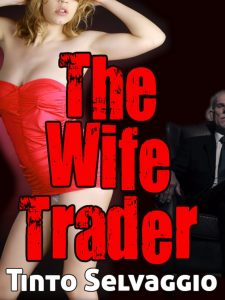 About The Wife Trader

Sometimes, all any young wife needs before she’ll consider an affair is the right experienced older male to appear in her life.

Recently-married Christopher has always felt a confusing thrill of jealousy whenever his pretty young wife catches the eye of another guy. He knows she’s loyal though and that lustful glances at her will be as far as it ever goes.

So when his wife Amanda becomes the object of desire for an older man – a boss at her new job, Christopher is surprised at how excited both he and his wife become.

He’s keen to use this new found excitement to re-ignite a sex life which has gone off the boil because of money and career worries.

But wouldn’t goading his wife to fantasize about this other man and getting her to encourage his further attention be playing with fire?

Especially when her admirer is a wealthy alpha male with an increasing obsession for the young hotwife? And when the mere thought of the older man starts to bring out submissive desires in Amanda that even her own husband didn’t know she had?

Learn More About The Author
Hey,

The focus (or should that be the "obsession"?) in my stories is firmly on the imbalance of power in relationships. Whether that be the hotwives with their alpha male lovers or dominant males and females with their submissives.

If you like what you read or have an idea for something else, I can be reached at via Twitter@TintoSelvaggio