You are here: Home / Cowboy/Western / Trail Through Time By Josie Malone 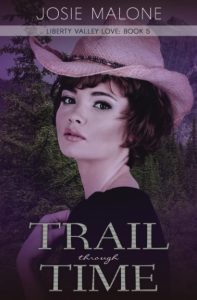 About Trail Through Time By Josie Malone

When a suspected murderer escapes from the Junction City jail, the marshal’s younger brother, Kyle Morgan feels honor bound to follow him from 1888 Liberty Valley to the 21st century. From what his new sister-in-law, former homicide detective Beth Chambers-Morgan has shared, Kyle knows a woman he’s only seen in pictures is in mortal danger. Somehow, he must convince her that he’s traveled more than a hundred years to protect her.

The survivor of a horrendous attack, horse rescuer, Nina Armstrong blames herself for the death of her best friend who pursued her assailant and vanished in Mount Baker National Forest. Now, a battle-scarred stranger arrives determined to guard Nina from the serial killer planning to eliminate the sole witness to his crimes. Intelligent, brave, Kyle Morgan talks like an old-time cowboy, but Nina wonders about his claims to be from a distant place and time. Why is she so drawn to him?

Love may prove to be the biggest threat of all when survival is on the line. Will they create a future together in Liberty Valley or will Kyle abandon her and return to the days of yesteryear? What is home and where will they find it?

Learn More About The Author
Josie Malone says, "I live on the family farm, a riding stable in the Cascade foothills. I organize most of the riding programs, teach horsemanship, nurse sick horses, hold for the shoer, train whoever needs it – four-legged and two-legged. And write books in my spare time, Liberty Valley Love, a paranormal western romance series, “where no matter what, soulmates find each other!” and the Baker City Hearts and Haunts, a paranormal military romance series – “where love is real and so are the ghosts!”