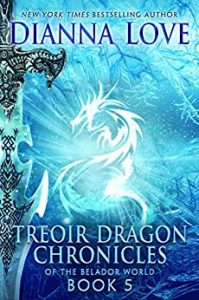 About Treoir Dragon Chronicles of the Belador World: Book 5 by Dianna Love

Book 5 in New York Times Bestseller Dianna Love’s new Treoir Dragon Chronicles of the Belador™ World continues an epic fantasy adventure with shocking surprises and twists.
Faced with losing the only grimoire volume Daegan has or turning his back on Casidhe, he makes a surprising choice. Time is literally running out of an hourglass for Casidhe to prove her value to Queen Maeve or face never leaving TÅμr Medb, but to hand the crazy queen a grimoire volume would destroy humans and nonhumans. Reese finds a place to stay away from those she cares for in Atlanta while hunting the origin of demons flooding the city, but she’s not as adept at hiding as she thinks.
Brynhild made a tactical mistake in underestimating humans with weapons and will not do so again. To destroy the red dragon, she needs a partner who understands this world and the one she selects has his own agenda.
In a bid to free Casidhe, Daegan agrees to enter a ghost castle where every step is a deadly trap set specifically to kill him.
*This is a 9-book spinoff series for first-time readers as well as current Belador fans.
All 9 books will release within a year and be available in e-book, print, and audiobooks.
“Excellent storytelling that is as breathtaking as it is enchanting!”
Clare and Lou’s Mad About Books
“I’m addicted to this new world and it just started.”
Amazon Reviewer
“HOLY COW! This is epic fantasy at its best! I’m exhausted. This is an incredibly complex world with characters that are heroic yet relatable. I am so loving this tale….”
In My Humble Opinion

Learn More About The Author
THE PATH NOT OFTEN TRAVELED
Dianna started out life as a photorealistic artist and launched her first business at the age of seventeen out of necessity. She was living on her own and working two jobs so she started painting signs and murals every free minute she could find. It wasn’t long before she had a following that allowed her to give up three other jobs. Years later, while painting over a hundred feet in the air, she started making up stories to keep herself entertained during the long days. That’s when she penned her first novel, which won the prestigious Daphne Du Maurier and Golden Heart® awards prior to being published by a New York house. Dianna has written urban fantasy, romantic thrillers, young adult sci-fi/fantasy and a nonfiction (writing reference) books. Her Belador urban fantasy series continues in January 2017 with Dragon KING OF TREOIR and she’s also working on the HAMR Brotherhood, a new romantic suspense line of stories. When she’s not in her writing cave in Peachtree City, GA (near Atlanta), she’s down on the Gulf coast fishing or off on a motorcycle adventure on her BMW bike.
Dianna loves to meet readers online and at live events. Be sure to step up and say hello when you see her out and about.