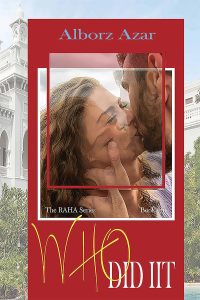 About WHO DID IIT

Alborz Azar has dedicated his first book, ‘WHO DID IIT’ in the RAHA series to Pantea (Lana). After Azar’s Eshgham professed as Lana inspired him to write and share his memoirs with the world, Azar started writing the story after an incident in March 2018. Although Azar is aware that her presence must be kept from the limelight, as she likes her personal life private. But he felt the love he had for Pantea was an incredible event that needed to be written on paper. The only other person Alborz ranks higher than Pantea is Rozhan his wife. The book is inspired by the true story of Pantea (now 41 years old) and Alborz (now 66 years old). In their journey, Alborz learns Pantea does not believe in love, yet somehow, she teaches him what he thought was love, is not the same as truly caring for someone unconditionally.

As their relationship progresses, the tides change and Pantea uses the word love for Alborz.
At least once a week, she openly says she loves him. However, unrevealed secrets place a strain on their bond, and just when Alborz thinks all is well, it reveals her random affair with someone.
In his attempt to repair the damage, Alborz admits he would have died for his beloved if there had been a good reason. Alborz shows how he would have done anything for Pantea’s happiness, even it meant losing everything. He discovers her wisdom is one of a kind, with unmatchable charm unlike any other girl on the planet; truly one in a billion.

Alborz’s horrible mistake is narrated in the second book by using her innocence to expose their relationship to one of her previous boyfriends, eight years before she met Alborz. The act is committed via phone messages and photographs sent to Alborz in love from Pantea, the consequences thereafter are revealed in the third book. He misused them under misunderstandings created by circumstances that reveal the misuse of Pantea’s trust. Their relationship teaches him how two people should treat each other, in a way that can only be based on sorting out disagreements through mutual discussions.

Learn More About The Author
Alborz Azar has been dubbed a hero by Pantea (Lana). The story is narrated by Alborz who was once called a great hero by the woman he loves. However, she declined to be titled as the author. In light of the situation, she chose to avoid involvement due to his family. Pantea would go on to call Alborz Azar Casanova, Marco Polo, her hero, etc.
Azar faced all the situations in his life with confidence and believed in the truth. The luxuries in life that he procured were due to his dedication to succeeding in business. They were not inherited from any family legacy.
The struggle to overcome all his difficulties with persistence started at the age of fourteen, but he found his passion for work and dedication drove him to succeed. However, he is still waiting for a successful conclusion in his long-drawn-out litigations for his legal rights. As time passed, his first love was his wife Rozhan continued to stay at his side. Thereafter, some lovely girls crossed his path; the most important was Pantea.

Azar’s dream to become a successful entrepreneur started at a young age. His drive to achieve a name in the corporate world was achieved to an extent, but he was held down by some dirty business rivals in false acquisitions. In the foreseeable future, his complete life story will be written in hopes it will touch the hearts of his readers.