You are here: Home / Featured Books / Wittingly Seduced by the Dashing Duke by Eleanor Banfield 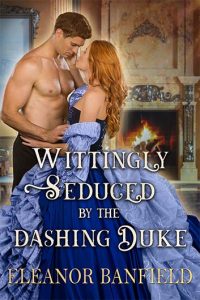 About Wittingly Seduced by the Dashing Duke by Eleanor Banfield

He is holding her in his arms, after losing her forever.

Aching from her mother’s abandonment, Rebecca Atkinson, daughter of the Duke of Astonbridge, must be strong for the sake of her bereaved father. When a letter arrives, she has to travel north and collect the pieces of her mother’s mysterious past.

Having lost his wife, the only thing that keeps Aaron Darry, the Duke of Forney, alive, is his daughter. But his mother’s sudden death unsettles his quiet life and forces him to confront an unexpected peril: a lady that arouses his utmost desires.

Rebecca and Aaron fall for one another like a lightning bolt; instantly and catastrophically.

Before long, secrets are exposed, an arranged betrothal is unveiled, and a series of attacks threaten Rebecca’s life. When Rebecca gets trapped in a burning building, Aaron is transferred instantly to the night his wife died. This attack might be the last…

Learn More About The Author
One would expect that Texas-born Eleanor Banfield would have been fascinated by Western Novels. But no! The irresistible Lords and seductive ladies from the Victorian and Regency periods won her over!

Growing up, her rebellious nature would always find her riding her horse or lying under a tree, getting lost in one of her favorite regency historical romances. Always itching for adventure, she was only sixteen when she decided to write her first story.

As soon as she finished school, she studied literature which soon became her passion. When she's not writing, Eleanor enjoys spending time with her husband, doing Pilates, and baking… not necessarily in that order! She also identifies herself as the biggest tea fan!

Her wild imagination promises to throw you back in time, into a world of passion, scandals, and intrigue. Allow yourself to be seduced…