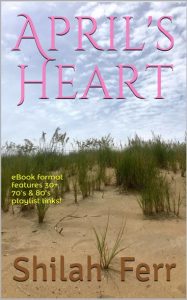 About April’s Heart by Shilah Ferr

Autumn 1977. Thirteen year old cheerleader April Schweiter falls hard for Mitch Hudgins, putting an end to childhood and changing her life forever. April embarks on a coming of age journey full of angst and unanswered questions. And her dysfunctional family is only one of the problems in her way.

Classmate and wrestler Mitch Hudgins can’t get enough of April either. She stirs in him surprising passion that is new, unfamiliar and needs to be explored.

“You guys are the nicest friends anyone could have!” April choked down a sob. She was still emotional at the realization of the future of her romance with the guy who took her virginity, the guy who once told her he loved her, the guy she fought for, the guy with whom she was really very happy with. She was heartbroken but didn’t know it yet.

This romance novel is the story of young love, hot and heavy, with all the drama of high school in the eighties. The ebook contains almost 40 Spotify music links on all the songs in the story, taking you there.

“What are we going to do Mitch?” April whispered.
“I don’t know April, I just don’t see how…” This time it was April who kissed him. She didn’t want him to say what he was going to say. Mitch didn’t want to say it anyway. They wanted things to stay the way they were, but that was impossible.

Find out what happens to the star crossed lovers with the on again, off again romance riddled with breakups.

Learn More About The Author
I grew up in Morristown, New Jersey with my brother and sister. We share treasured memories of high school, the Jersey shore and skiing with cousins in Mt. Snow, Vermont, all of which became part of April's Heart. I went to college in Washington, DC and became a teacher. I live in Virginia Beach, Virginia with my husband of thirty years. Our two boys are in their twenties making their own way in the world. I enjoy cooking (I've done some catering), my daily power walks (my preferred method of exercise), and hanging out on the beach. April's Heart is dear to my heart as it is very personal, basically following the outline of my life.