You are here: Home / Archives for Action & Adventure 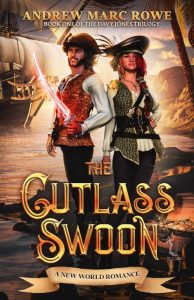 About The Cutlass Swoon: A New World Romance

Strange Lovers In Dangerous Times, Or Dangerous Lovers In Strange Times? Only Time Will Tell…

David Holloway is an Ensign on a British galleon with a secret: he’s had enough of the legitimate way of doing things. His master plan? To break bad and join up with a pirate crew. Slicing and dicing and blasting his way into the graces of a cursed Captain Starling, David’s hidden double life in a European mysticism club comes crashing into full view of his crew right around the time he meets the love of his life, the enigmatic Heather Mercado. Before the pair can enjoy their newfound company, betrayal leaves them high and dry, desperate for a crew and a ship and… pretty much everything piratey.

Everything, that is, except for a magical cutlass made of pure ruby.

When he’s not flapping silvern tongue at prospective crew or tangling the regular kind with Heather, David’s skill as a magician emerges. He might have already mastered combat and the mystical arts, but his ability as a leader and a lover will be tested beyond the bounds of reason. As the lines between the real world and David’s spiritual realm blur and disappear, angels and demons and voodoo spirits take centre stage. Can David come to terms with his own past in time to put an end to Captain Starling’s reign of terror? And is it even his job?

Maybe he’ll find out… as long as he brings enough hot chocolate.

END_OF_DOCUMENT_TOKEN_TO_BE_REPLACED 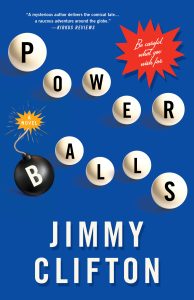 About Powerballs: Be careful what you wish for.

With marriage and finances strained beyond repair, Rose and Henry dream of new lives filled with romance and adventure. With a record lottery win, the couple leap out of the frying pan – and into the fire.

END_OF_DOCUMENT_TOKEN_TO_BE_REPLACED 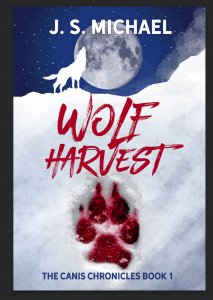 Coda is a hybrid wolf living on the outskirts of downtown Pittsburgh where everyday is a fight for survival as he fends for his loved ones. Then one day a mysterious female comes into his life, turning his world upside down.
Following him is Sam and Amy, two college students who study his species.
When Coda leads a pack of misfits to Northern in worst of winter, they will risk everything to find the reason for this unexplained exodus.
‘Wolf Harvest’ is a tale of humor, heartbreak, bigotry, and cunning in the face of fear.

END_OF_DOCUMENT_TOKEN_TO_BE_REPLACED 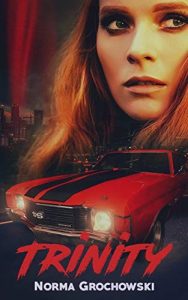 “It’s been ten years since her mother was murdered, but Mary can’t move on. And when she finds out new information about her mother’s death, there’s no stopping her as she seeks revenge on her killer. Packed with action, a crime to solve, and budding romance, Trinity follows Mary as she grapples between taking vengeance or learning to let go.”

END_OF_DOCUMENT_TOKEN_TO_BE_REPLACED 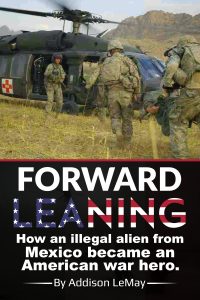 When a Surgeon from Mexico is forced to flee his country from gang violence, he runs to America to start a new life for his family. In order to gain legal status he joins the US Army and is sent to Afghanistan. Because the United States does not recognize his Mexican Medical License, the US Army will not let him join as an officer. Instead he must work as an enlisted medic. He is constantly at odds with his chain of command for exceeding his authority and practicing medicine and is at risk of being court martialed and sent back to Mexico. While in Afghanistan the brother of a warlord kidnaps American volunteers to hold for ransom. The Undocumented Immigrant doctor turned Army Medic is quickly pulled into a Special Forces mission that needs his surgical experience to save a warlord’s daughter and rescue the American hostages. This book is filled with real world experience of Special Forces military operations.