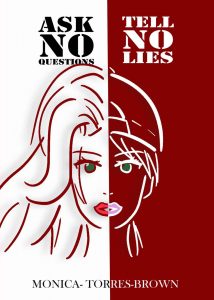 About Ask No Questions Tell No Lies

Ask No Questions Tell No Lies, depicts a lifestyle many find alluring in the beginning. The idea of working a straight job for minimum wage, struggling to make ends meet seems impossible. On the other hand, living in the ‘Game” is filled with untold riches; if you are willing to pay the price at any cost.

Natalia learned quickly the benefits supplied by the lifestyle, money, image, and most of all control. The idea seemed innocent at first, but as time passed, she looked in the mirror at a complete stranger. She became heartless, with no compassion for men or another person, the only thing that mattered was obeying rules of the ‘Game’.

In the beginning, the concept of a secret life to a young woman is exhilarating, being able to experience such passion from a man she barely knew developed the drive to proceed into the dark underworld of prostitution.

After Natalia is unable to separate herself between two lifestyles it starts the beginning of her story. “In my younger, ignorant stages of youth, I will never forget Frenchie’s face in my rearview mirror. She was standing in the rain with two garbage bags in her hands; they held everything she owned.”

Natalia is consumed with the drive for money and fame; working to impress Malik. In the end, the connection between them is what ultimately saves her life. When she learns that her pimp has fallen in love with her, she is enamored in the beginning, but after the love turns sour, she turns to the only people she can trust, her tricks.

Learn More About The Author
I dedicate this book to my high school best friend who spent much of her life fighting to leave the game. When she finally escaped, it took much of her soul. A burning desire grew inside me to share her story, so that it may touch the life of someone else still trying to be true to the game.

Natalia’s life at this point was ever-changing. The past had accustomed her to a certain lifestyle: money, image, and control. Sometimes, the person in the mirror is a stranger. She became heartless, with no compassion when it came to men, basically, she hated the male gender. All the secrets shared by the tricks are stuck in her head to this day. Men are cheaters full of lies, from pro-ball players, actors, medical professionals, pastors, politicians, law enforcement down to an average guy next door mowing his lawn.

When she drove past a hotel and saw a man entering, she wondered, how long will it take for him to open the phone book and call an escort? Or, will he call his wife first? When she sat at a traffic light or walk down an aisle in a store and see a man is with his wife, she’d wonder, what kind of escort does he prefer? What are his sexual fantasies? What secrets is he keeping from his wife?

The memories haunted her and she couldn’t find an escape, the bitterness grew until it ruled her life. She saw life differently than a normal person. When Natalia went clubbing and a guy approached her trying to be suave, she wondered is he a pimp? Is he a trick? Is he a cheater?

She was intent on every word; and started learning to live with the emptiness as she woke up alone… The betrayal in her blood family, the one in the game, she trusted no one. If you think about it, she became the same cheater and liar as the people she despised. She is no better than these men she had grown to hate.

As for everyone in the game, who developed relationships, they are probably still in the game, in jail, or dead. Sometimes, you wonder what happened to everyone, but then she crushed the curiosity and started thinking about the good things that are a part of my life. Natalia had no connection with anyone and would like to keep it that way. However, one thing is for certain, she does not look over her shoulder any longer, as she once used to.

It took years to overcome this wall of hate. Natalie has gone through many relationships with men and women, some she regretted and some she didn’t. Thanks to the help of her parents, and close friends, their unconditional love brought life back into her. The strength buried inside allowed Natalia to finally become the person she is proud of today: loving, compassionate, helpful, strong, and honest. She took the good traits from the game and brought them to the “straight life.” She learned from my past and left it behind. The change allowed her to reconcile the mistakes, bringing joy and laugher back in life.

Natalia’s message to you is, stay strong, be positive, and no matter how much you want to give up, don’t. You are stronger than you think. You are not a young naive girl anymore, but well-rounded and blessed. She felt you have a lot to offer and is proud to announce this chapter of her life is officially closed.