You are here: Home / Clean Romance / Flirting with Infidelity 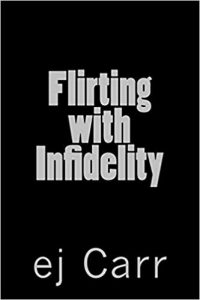 About Flirting with Infidelity

A love story about Stuart; an honest, straight, extremely moral, right wing, very conservative man; who is married to a selfish liberal woman who is in it only for herself.He was one of the casualties of the MF Global debacle, attributed to Jon Corzine, the former governor of New Jersey. Prior to his firing pursuant to the downfall of this world renown mammoth commodities trading brokerage, he had earned a seven figure salary. The novel has him unemployed for three years, watching his financial resources, as well as his self-esteem, dwindle rapidly, as he wallows in self-pity and frustration of what was and what could have been.Down on his luck, the momentum of his decent was overturned by a fortuitous event….
Stuart broke into her thoughts. “Tara, you’re on the fifth floor?”“Yes.”“I assume there is an elevator?”“Yes.”“I hope it’s reliable.”“I’ve lived there for a little over a year. It’s only broken down once, about four months ago. But they fixed it. We should be fine.” Her ankle started to throb. Leaning against the window, she closed her eyes against the pain, wondering if it was time to take another percoset. The cool pane was somehow very soothing.Before she knew it, the cab had pulled up in front of her building. And by that time her ankle felt as if it was being crushed in the coils of a python. Determined to not let it get the best of her, she scooted out of the back seat. Stuart handed her the crutches and she hobbled over to the steps.Suddenly, a wave of nausea washed over her. Feeling weak and pitiful, she took a couple of deep breaths. ‘All I have to do is make it up my apartment. Then I can take another pill and crash,’ she told herself. Somewhere in the background she was aware of a conversation between Stuart and the cabbie. From what she could tell, Stuart had given the driver a fifty. Though she couldn’t hear what he said, he seemed excited because he waddled out of the vehicle and helped Stuart with her belongings.Determined to get up the steps by herself, Tara made it to the landing and unlocked the building. Then she swung the door open. Behind her, loaded down with her belongings, Stuart struggled through it. But instead of moving forward, she stopped dead in her tracks.Stuart bumped into her. “What?”She pointed to the sign on the elevator. It read “Out of Service”. Turning, she looked from him to her belongings, and then to the stairs. She simply couldn’t ask him to do it. He’d already done so much for her. As the impossibility of the task weighed in on her, tears gathered on her lashes. Embarrassed by the emotional display, she sniffled. Once again, he surprised her. Instead of cursing, he grinned.“No problem. I didn’t get a chance to go to the gym today.”Setting the canvases on a chair, he then leaned her crutches against the wall. “Hold on.” In one smooth movement, he swung her up to his shoulders. Using a fireman’s carry, he climbed the stairs to the 5th floor. Caught between delight and embarrassment, her tears disappeared. Halfway up, she even started to laugh. And to her utter humiliation, she couldn’t stop. When Stuart deposited her in the hall, she was still giggling. …
When touched, the glasses chimed. “Happy New Year”, they said simultaneously. Each took a sip.Tara closed her eyes. The thought that he might offer a New Year’s kiss made her pulse jump.But instead of leaning in, he asked, “Is something wrong, Miss Jennings?”Her eyes fluttered open. I should have known better. I’ve known him for a while now. His moral compass is pristine beyond belief. Thinking quickly, she leapt into another subject. “I just had an incredible idea.”She picked up her cell phone and dialed. He noticed the area code of 317 and asked, “You’re calling someone in Indiana?”She aborted the call. “You and your numbers! That’s incredibly irritating,” she teased. “And, yes. I want to call JP McLaughlin in Muncie, Indiana.”“You know JP McLaughlin?”“Yeah. Do you know him?”

Learn More About The Author
An almost PhD in Non Associative Algebras, who upon the death of his father, sold his soul to the devil and became an actuary. Carr, the quintessential "jack of all trades and master of none", had his fill of contemporary movies whose popularity is directly correlated with the rate of violence, unrealistically bizarre car chases, gunfire, continual cursing and sex scenes. He was determined to turn the whole system on his head by composing something refreshing and totally different.