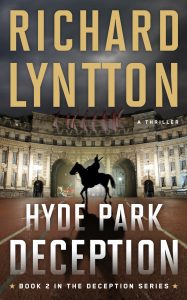 While on Queen’s Life Guard ceremonial duties in the heart of London, British Household Cavalry subaltern Jack Steele is stunned to see his estranged brother standing next to the daughter of an indicted Bosnian war criminal in Hyde Park. What happens later that day changes his life forever …
In this second in a series of international political thrillers, British United Nations Military Observer Jack Steele becomes a pivotal player in a web of international intrigue, death, and destruction. Steele must infiltrate the Bosnian Serb stronghold of Pale, near Sarajevo, and becomes embroiled in a top-secret and merciless Western political and military conspiracy to destroy the Bosnian Serbs. As the desperate attempt to neutralize the threat of Islamic terrorism in the heart of Europe spirals out of control, the only way to stop a third World War is to find the Sarajevo Protocol before everyone else—the Bosnian Serbs, Muslims, Croats, the European Union, the CIA, and MI6, all of whom will kill, maim, and slaughter, even their own, to get it. Throughout his perilous assignment, he must battle against his feelings for the daughter of the Bosnian Serb leader as well as the elusive and seemingly fathomless location and the true meaning behind the Sarajevo Protocol.

Learn More About The Author
Richard Lyntton is the author of North Korea Deception and Hyde Park Deception. He attended Exeter University, Moscow State Linguistic University, and Sandhurst. Richard served as a Captain and tank commander in the British Army in the first Gulf War; European Community Task Force Humanitarian Liaison in Russia; UNHCR Liaison Officer, and United Nations Military Observer in Sarajevo, Bosnia; and was a United Nations Television producer in former Yugoslavia. He was called to testify at the International War Crimes Tribunal in the Hague after witnessing and filming human rights atrocities and abuses in Bosnia. His films are archived at the Imperial War Museum, London.
When he's not writing, Richard is a professional actor. He lives in Philadelphia with his wife, interior designer Michelle Wenitsky, and their two sons.