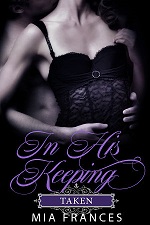 About IN HIS KEEPING: TAKEN

Out of work and on the verge of being homeless, Sylvie Jenkins is desperate. Her desperation leads her to take a job with a reclusive writer living in the Adirondack Mountains of upstate New York. She’s never heard of Connor Hudson, but the man is offering her room, board, and an extremely generous salary. How bad could he be? Sylvie is shocked to learn that she might not know who Connor Hudson is, but millions of readers do, scarfing up the books he writes under various pseudonyms. And Connor’s not just a bestselling author. He’s a billionaire entrepreneur whose publishing and media empires span the globe.
Her new employer is a drop-dead gorgeous hunk, but he’s also surly, dominating, and demanding. He issues orders and expects her to obey them, but Sylvie has a rebellious streak and gives him a hard time. She doesn’t like playing power games, especially not with him. She bristles at his condescending attitude toward women in general and her in particular. As far as she’s concerned Connor Hudson, though male model handsome is a jackass! Connor can’t believe the cheek of this sassy little imp! He’s used to women fawning all over him, begging to do his bidding. But his wealth and position don’t impress or intimidate her. He finds her indifference toward him intriguing. He’s never known a woman who didn’t welcome his advances…until Sylvie. She ignores him, when she isn’t arguing, or cursing him under her breath. This alpha male decides his feisty assistant needs taming. And he’s just the man to do it. He’s determined to make her obedient, respectful, and submissive. Naive and nerdy, Sylvie mistakes sex for love. But Connor can’t love her. Not now! Not ever! He’s keeping secrets: dark and dangerous secrets. The cops think he’s a serial killer. His ex girlfriends keep turning up dead! Is this strict, sexy alpha male a cold-blooded killer?

Learn More About The Author
Mia Frances is the pen name of author Mary Vigliante Szydlowski. As Mia, she's the author of the dark post-apocalyptic romance, TRIBES; steamy romantic suspense novel, Little Girl Lost; and the erotic romance, murder mystery series: IN HIS KEEPING: TAKEN, IN HIS KEEPING: BANISHED, and IN HIS KEEPING: CLAIMED.
Her Science Fiction/Fantasy works include novels: The Ark (Jarl Szydlow), The Colony (Mary Vigliante), The Land (Mary Vigliante), Source of Evil (Mary Vigliante), and novella, The Hand of My Enemy. She's also the author of horror novel, Worship the Night; and Dark Realm, the tale of a dystopian world ruled by Satan. In addition, she's the author of mainstream novel Silent Song. She’s also published 10 children's book: Are We There Yet?, Little Sowbug & the Big Flood, Ghoul School, Millie Muldoon & the Case of the Halloween Haunting, Millie Muldoon & the Case of the Thanksgiving Turkey-napper, Millie Muldoon & the Christmas Mystery, A Puddle for Poo, Kia’s Manatee, The Duck in the Hole, and I Can't Talk I've Got Farbles In My Mouth.
Her short stories, articles, children’s stories, essays, and poems have appeared in books, magazines, newspapers, and on the web. She's also a contributor to the Chicken Soup for the Soul anthologies: The Dog Did What?, Volunteering and Giving Back, Merry Christmas!, Mom Knows Best, and Life Lessons from the Dog.
She's a member of the Authors’ Guild, Society of Children’s Books Writers and Illustrators, Science Fiction & Fantasy Writers of America, and Romance Writers of America.