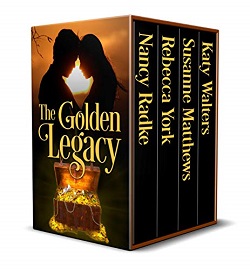 About The Golden Legacy Boxset by Nancy Radke et al

FIVE stories of passion and excitement, all the result of THE GOLDEN LEGACY.

The legacy of a pirate treasure is either a curse or a blessing depending on if it’s used for good or evil.

Early in the 1700s, a modest merchant ship sailing the Caribbean is attacked by pirates. Although smaller, The Golden Fleece bested the brigands’ craft loaded with a treasure trove of gold and jewels. The last words of a dying pirate claimed the Incas had cursed anyone who misused the treasure but anyone who used it for good would be blessed. The greedy merchant captain was killed during the battle, but his 18-year-old daughter survived. Mindful of the curse and to thank God for their salvation, she asked the crew members to split the treasure equally. They made a binding pledge to keep only twenty percent for their own use and give ten percent to help others. With the rest, each was to buy something of great value that could be given to their descendants. The curse, though, would be passed onto anyone who broke the oath and used the gains selfishly.
Love survives despite the trauma of pirates, kidnappings, and murder; villains and slave uprisings, lies and deceptions. Travel from the eighteenth to twenty-first century and find what perils and pleasure await in this box set collection of romance stories based on the purloined pirates’ treasure of THE GOLDEN LEGACY from USA Today and NY Times Bestselling Authors.

Learn More About The Author
A New York Times, USA Today, and Publishers Weekly best-selling and award-winning author, Rebecca has written over 150 books and novellas. In 2011 she became the dozenth author to receive the Romance Writers of America Centennial Award for having written 100 romantic novels.