You are here: Home / Fantasy / The Knight and the Shieldmaiden 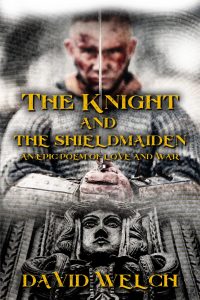 About The Knight and the Shieldmaiden

Quiet moments he couldn’t find
the day that she entered his mind,
to love a rough-and-tumble girl
he’d risk the wrath of his whole world…

A better life she’d never known,
or a good man to call her own,
but when she had all that and more,
she found her love shattered by war…

Brath’in was a young soldier, and the third-born son of a minor noble house. In no position to inherit, he set off to the capital to serve his king and make a name for himself. And he had done so, becoming a commander in the garrison, and a well-respected fighter. But this ‘respectable’ life came to an end with a trip to the fighting pits, where he met Mel’ya, a woman gladiator who had won some small fame fighting and defeating any man that entered the ring with her. Completely taken with each other, they set off on an impossible marriage, defying tradition and the nobility to be together.

But the powers-that-be, and Brath’in’s own family, aren’t thrilled with the match. They’ve set out to do everything they can to break the two apart, a situation made all the worse by simmering tensions in the Kingdom of Aguaiadane. When rebellion threatens, Brath’in finds it’s more than just family trying to split them up, it’s also the causes they stand behind. Soon the two lovers will find themselves tossed into a situation they cannot resolve; desperate to be together, but stuck in a world that might never allow it to be…

Learn More About The Author
David Welch hails from the capital district of upstate New York, where he has lived all his life. He is a long-time fan of action-adventure tales in all genres, be it classic pulp tales, shoot 'em up westerns, or ripping space operas. When not writing he spends his time hiking, skiing, and exploring out of the way places. His books are all available on Amazon.