You are here: Home / Featured Books / When Angels Fall by Tricia Lynne 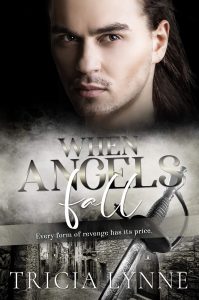 About When Angels Fall by Tricia Lynne

Fifteen years after a botched murder attempt by his twin brother, Niles, Nicholas St. Aubyn has returned to England. Nothing will stop him from burying his infant son in the St. Aubyn cemetery. Not even the fact that he could be hung for piracy. Vowing to retrieve his birthright for his daughter, he takes a part in a play hoping to ruin his brother’s reputation as an esteemed theologian. At the theatre, he meets a talented actress with dark secrets of her own.
After surviving an abusive marriage, Isobel Montigue is a titled lady with a scandalous reputation. With no hope of marriage, she longs to make her life remarkable. While her brother’s on holiday, she takes the chance to follow her childhood dream to act. Nicholas and Isobel are chosen for the lead roles and as tensions heighten in the play between the characters, the attraction soars between them. When Isobel is confronted by her abusive brother-in-law, Isobel must put her fear of rejection aside to trust Nicholas with the details of her past. But will the truth keep them together, or tear them apart?

For sale on Amazon KDP. https://www.amazon.com/dp/B09X4V8FW4

Learn More About The Author
When I was ten I fell in love with Laura Ingalls Wilder and Louisa May Alcott to the extent I spent my summer days between fifth and sixth grade writing stories about the prairie. Five years later, I fell in love with Judith Krantz, Stephen King, and Danielle Steel. I started writing women's fiction and I majored in Creative Writing in college. Five years later, I discovered Historical Romance and never looked back. Love is timeless, love is ageless, and I wanted to write about people who aren't the easiest to live with. I write redemption stories, with a lot of steam, angst, and sometimes swearing in the middle, (Pirates and smugglers swear.) but my characters always get an HEA. I live in Nebraska with my husband and two cats. You can find me at https://linktr.ee/tricia_lynne